Abstract
Graphic design cannot survive on its own: it has to be tied to other subjects or fields to express itself.
To create an optimal visual code in grade to allow us to show data, we need to study the hierarchy of visual elements, the properties of an image, the perception of the human eye and the visual system. An aware use of the tools at disposal of the graphic designer allows him to convey the message in a clear and accessible way.

In this thesis, the purpose of graphic design is to show biological data, the starting point being the molecular structure of proteins and their amino acid composition. The visual code developed for this aim suggests a new way to show amino acids through their hydropathic values. Crossing two different kinds of data, normally analysed distinctly, we can analyse a protein from different points of view: as a sum of its elements and as a whole object with its own properties.

The visual code has been implemented as a script for VMD, a molecular visualization program that displays, animates and analyses large bio molecular systems using 3-D graphics and built-in scripting. This open-source software is developed and distributed by the Theoretical and Computational Biophysics Group of the University of Illinois and Beckman Institute. 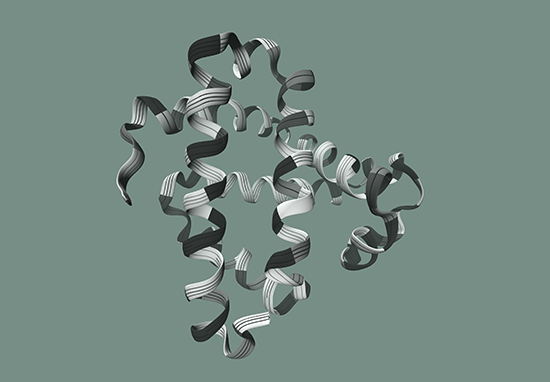 This website uses cookies to improve your experience while you navigate through the website. Out of these, the cookies that are categorized as necessary are stored on your browser as they are essential for the working of basic functionalities of the website. We also use third-party cookies that help us analyze and understand how you use this website. These cookies will be stored in your browser only with your consent. You also have the option to opt-out of these cookies. But opting out of some of these cookies may affect your browsing experience.
Necessari Sempre abilitato

Any cookies that may not be particularly necessary for the website to function and is used specifically to collect user personal data via analytics, ads, other embedded contents are termed as non-necessary cookies. It is mandatory to procure user consent prior to running these cookies on your website.